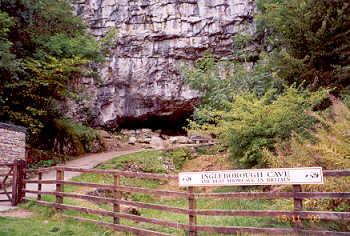 The entrance to Ingleborough Cave is at the base of a limestone cliff in Clapdale, a pleasant walk from the village of Clapham in the heart of the Yorkshire Dales' "Three Peaks" country.

Part of the cave is electrically lit and open to members of the public, but at the end of the show cave what lies beyond is strictly for experienced cavers and potholers only - a complex of caverns which eventually connect with the main Gaping Gill system, the waters from which emerge at Beck Head Cave a short distance from the main (dry) entrance of Ingleborough Cave.

Although the main entrance is prominent the cave remained unexplored since prehistoric times, principally because a calcite dam just inside the vestibule blocked access, holding back a lake and flooded passage which would have deterred most visitors. However in 1837 Joseph Farrer (who owned much of the surrounding land) had the calcite dam dynamited, releasing the trapped waters in what would have been a spectacular torrent and opening up the passages for prdestrian access.

Since then Ingleborough Cave has been developed as a popular show cave, now having a concrete floor and electric lighting. An interesting feature throughout the cave is that the water level of the old lake can easily be deduced, with formations such as flowstones being clearly truncated along a horizontal plane where the surface of the water would have been.

More information about caves, caving and potholing in the Yorkshire Dales.