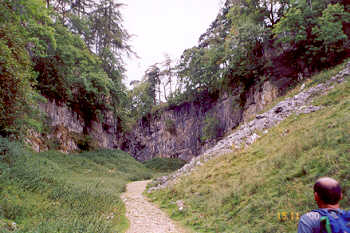 Trow Gill is a wooded limestone ravine at the head of Clapdale near Clapham in the heart of Yorkshire's "Three Peaks" limestone country.

Now a dry gorge, Trow Gill was possibly once an underground cavern formed by waters which now take an alternative route through the Ingleborough Cave / Gaping Gill system. At some point in time the roof of this cavern is believed to have collapsed - Trow Gill being the suggested result (though other theories have the ravine as simply a glacial meltwater channel).

Near Trow Gill is Foxholes, a neolithic rock shelter.