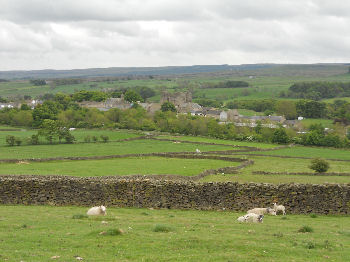 Bowes is a village which lies in the Stainmore Gap on the A66 near Barnard Castle.

Somewhat confusingly, the famous Bowes Museum is not actually in the village of Bowes, but can be found just outside nearby Barnard Castle. Bowes has its own castle, which is known (somewhat more appropriately) as Bowes Castle.

It is believed that a private school called the Bowes Academy which was located in the village may have provided at least some of the inspiration for "Dotheboys' School" in Charles Dickens' "Nicholas Nickleby", the author having stayed at nearby Barnard Castle while researching the novel.