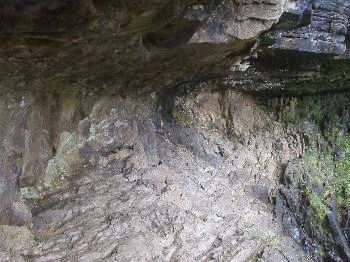 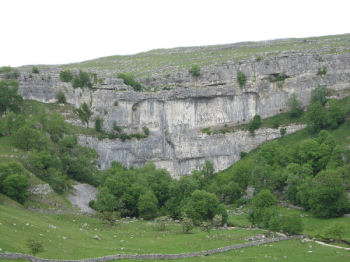 The Craven Fault is actually a series of geological fault lines (including the North Craven Fault, the Mid Craven Fault, and the South Craven Fault) which run along the southern and western edges of the Yorkshire Dales, formed at the underlying boundary of the Askrigg Block.

Along the length of the Craven Fault (which generally defines the boundary between the limestone uplands of the higher dales and the gentler scenery to the south and west) there are some quite spectacular limestone features, including the geological unconformity and waterfall at Thornton Force near Ingleton (pictured above left), with similar examples of unconformity to be seen near Clapham and Austwick.

Further along and near to the fault lines more limestone features can be seen at Feizor and Giggleswick Scar, Attermire Scar near Settle, Malham Cove (pictured above right), and Gordale Scar near Malham in Malhamdale, Linton Falls in lower Wharfedale, and the sinister gorge of Trollers Gill above Skyredale near the surface termination of the fault at the Skyreholme Anticline.

At several points along the southern edge of the Craven Fault are ranges of reef knolls - limestone hills which formed as coral atols in the warm shallow waters of an ancient prehistoric sea. Fine examples of these limestone reef knolls can be seen on the limestone moors above Settle, in the southern part of Malhamdale and at the Cracoe Reef Knolls (which lie between the twin villages of Rylstone and Cracoe and Burnsall in the so-called Barden Triangle.

[N.B. Please click here for more information about the geology of the Yorkshire Dales.]