The Tour de France comes to the Yorkshire Dales 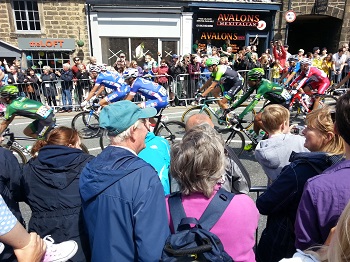 On Saturday 5th July 2014 the Tour de France came to the Yorkshire Dales as part of the "Grand Depart" (which often starts outside of the home nation of the world's biggest cycle race).

Starting out in Leeds the cyclists rode out to Harewood House and then in to the Yorkshire Dales region, taking in Otley, Ilkley (pictured above), Skipton, Grassington, Kilnsey, Kettlewell, Kidstones Pass, Aysgarth, Hawes, Buttertubs Pass, Reeth, Leyburn, Masham and Ripon before finally arriving on the Stray in Harrogate at the end of an exciting day for British cycling in general - and Yorkshire in particular !

Britain's own Mark Cavendish (of Omega Pharma Quick-Step Cycling) was tipped to win the famous "Yellow Jersey", but crashed out in the final sprint, leaving Germany's Marcel Kittel (of Giant Shimano) victorious !

The day's event was clearly an astounding success with a multitude of spectators watching the race even at the most remote locations along the route, and it has recently been announched by the organisers that a self contained "Tour of Yorkshire" cycle race may be run in 2015.

The Yorkshire Dales is designed and maintained by Eagle Intermedia Publishing Ltd.