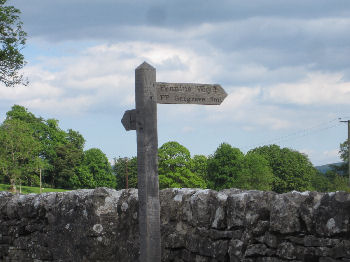 The Pennine Way is a 250 mile long distance footpath which starts at Edale in the Derbyshire Peak District and ends up at Kirk Yetholm in Scotland. Along the way Britain's longest public access footpath takes in some of the sights of the Peak District, Bronte Country, the Yorkshire Dales, the Northern Dales and the wild fells of Northumberland before crossing Hadrian's Wall and on to the finishing point at Kirk Yetholm just over the border in Scotland.

Entering the Yorkshire Dales region from Thornton in Craven in the south the path crosses the Aire Gap to Gargrave then Malham and the dales proper. Attractions here include Malham Cove, the Dry Valley of the Watlowes, Water Sinks and Malham Tarn (all of which lie directly on the route - though a short detour to take in the very spectacular Gordale Scar and the picturesque Janet's Foss is highly recommended).

From here the path strikes out on to high fells and wild moorland with an ascent of Fountains Fell followed by Pen-y-Ghent (one of the area's famous Three Peaks), before descending in to Horton in Ribblesdale. The Pennine Way then leads on up to the end of Ribblesdale at Ribblehead.

Other attractions and places which can be taken in further along the route through the Yorkshire Dales include Hardraw Force (reputedly England's highest waterfall) just a short detour from Hawes at the head of Wensleydale, Keld near the head of Swaledale, the remote moorland hostelry at the summit of Tan Hill, the reservoirs of Baldersdale and Lunedale, and the spectacular waterfalls of High Force and Cauldron Snout in Teesdale.

The following (external) websites may also be of interest: