Welcome to the Yorkshire Dales

The Yorkshire Dales is an area of great natural beauty in Northern England, a large part of which has been designated as a national park. [N.B. Due to political boundary changes some areas of the "classical" Yorkshire Dales area actually lie outside of the modern county boundaries which now officially constitute "Yorkshire".] 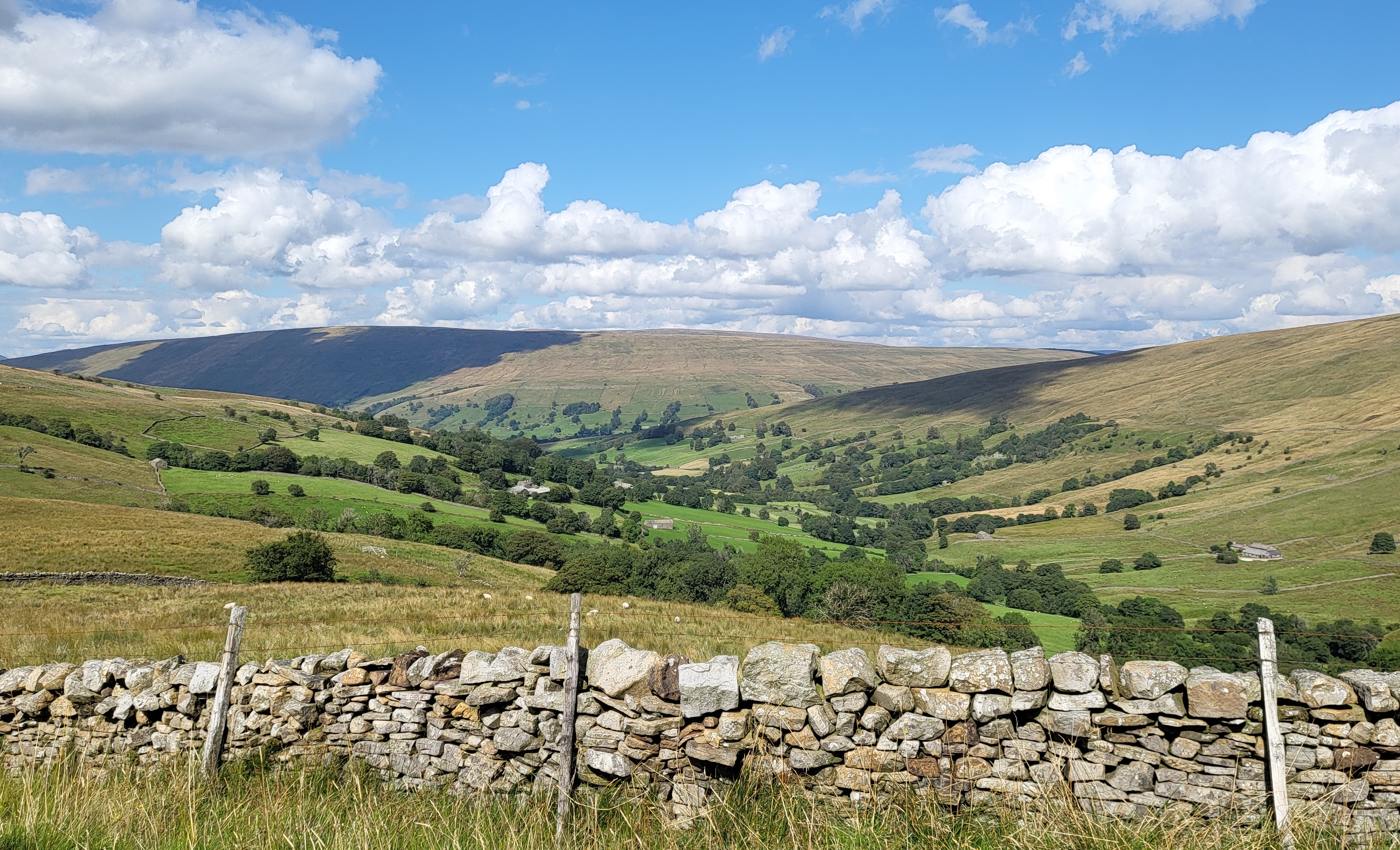 Much of the landscape here is limestone country - lush green valleys (known locally as "dales") crested with white limestone cliffs ("scars") and limestone pavements cutting through wilder uplands beneath towering peaks of dark millstone grit. Throughout the dales, fields and pastures are bounded by distinctive drystone walls which criss-cross the hillsides in elaborate patterns; set against the limestone cliffs and escarpments these walls (which were originally built by sheep farmers in days gone by) look almost a natural part of the limestone scenery as viewed today. 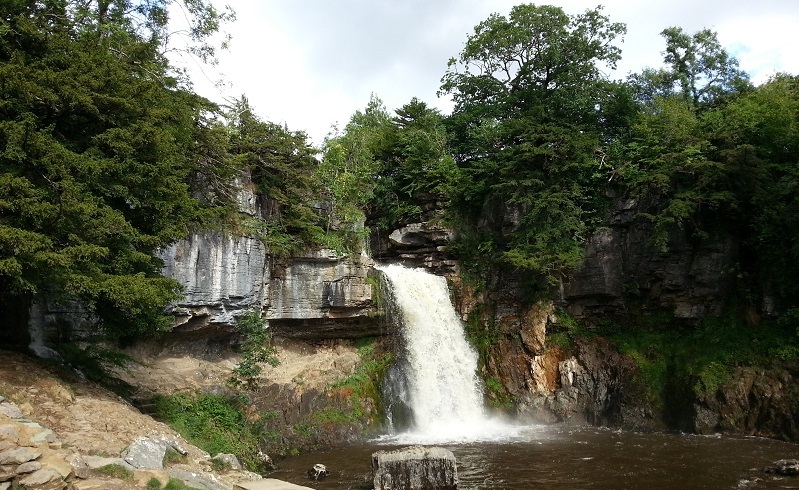 The geology of the area gives rise to some spectacular and unusual natural features, such as the towering white cliffs and limestone gorges of Malham Cove and Gordale Scar near Malham, Kilnsey Crag at Kilnsey in Upper Wharfedale, How Stean Gorge and the naturally sculptured millstone grit outcrops of Brimham Rocks near Pateley Bridge in Nidderdale, as well as dramatic waterfalls sometimes hidden in deep wooded ravines such as those found on the famous Waterfalls Walk at Ingleton (which includes the impressive Thornton Force, pictured above), Hardraw Force in Wensleydale (which is said to be Britain's highest unbroken waterfall), and also the very spectacular High Force in the northern reaches of Teesdale.

But besides the obvious attractions, a hidden world lies beneath the surface of the Yorkshire Dales, with the limestone hills being honeycombed by countless caves and potholes. A subterranean wonderland of stalactites and stalagmites, cathedral-sized chambers, underground rivers and waterfalls waits here to be explored by the intrepid, with new passages and cave systems still being discovered and surveyed. 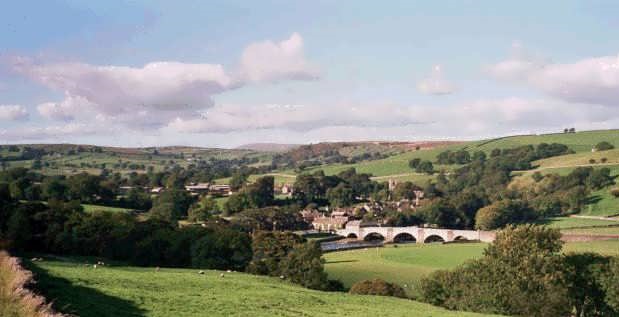 Gentler tourist attractions include popular riverside beauty spots such as Bolton Abbey and Burnsall (pictured above) in Wharfedale, and Aysgarth Falls in Wensleydale. These often get busy especially in the summer, though it is usually easily possible to get away from the crowds in the hundreds of square miles of unspoiled countryside that lie within the boundaries of this beautiful area.

Geographically, the classical Yorkshire Dales area spreads to the north from the market and spa towns of Settle, Skipton, Ilkley and Harrogate in North Yorkshire, with most of the larger southern dales (e.g. Ribblesdale, Malhamdale, Wharfedale and Nidderdale) running roughly parallel from north to south, and the more northerly dales and valleys (e.g. Wensleydale, Swaledale, the Stainmore Gap and Teesdale) running generally from west to east. There are also many other smaller or lesser known dales (e.g. Arkengarthdale, Barbondale, Bishopdale, Clapdale, Coverdale, Crummackdale, Dentdale and Deepdale, Garsdale, Kingsdale, Littondale, Langstrothdale, Mossdale, Raydale, Sleddale, Waldendale, Widdale and the Washburn Valley - to name but a few) whose tributary streams and rivers feed in to the larger valleys. [N.B. Please click here for more information about the geographical definition of the Yorkshire Dales area.]

To the east the countryside becomes gentler, sloping off to the Vale of York and the towns of Ripon, Thirsk, and the historic city of York itself. Beyond that, to the north east lies Yorkshire's other national park, The North York Moors - stretching across to the Yorkshire Coast, and the popular seaside resorts of Whitby and Scarborough.

To the south west and the south lie the wild heather moors of Bronte Country and the industrial conurbation of West Yorkshire - including the cities of Leeds and Bradford.

Needless to say, there are lots of things to do in the Yorkshire Dales - including walking and rambling, cycling and mountain biking, rock climbing and caving and there are other adventure activities possible too. Britain's most famous long distance footpath, the Pennine Way passes through the Yorkshire Dales, as does the Dales Way and the Dales High Way footpaths, Wainwright's popular Coast to Coast Walk, and the world famous Settle - Carlisle railway line - one of Britain's most spectacular train journeys. Other railways taking in the scenery of the dales include the Embsay and Bolton Abbey Steam Railway, and the Wensleydale Railway.

With its stunning scenery the Yorkshire Dales area served as inspiration for the poets and artists of the "romantic movement" of the 19th Century, including William Wordsworth and J.M.W. Turner and the region was well known to John Ruskin too.

Having also featured in several television series and films of recent years (e.g. James Herriot's "All Creatures Great and Small", ITV's soap opera "Emmerdale", "Calendar Girls" and the Hollywood movie "Robin Hood - Prince of Thieves" etc.), tourism plays an important part in the economy of the Yorkshire Dales area today, though even the most popular sites still remain usually less busy than some of England's other areas of great scenic attraction (e.g. the Lake District). For sheer solitude and unspoiled natural beauty, the Yorkshire Dales remains one of England's "crown jewels", and no visit to the north should be complete without exploring some of the country's finest limestone scenery.

For more information about places to visit and practical information about the Yorkshire Dales please take a look around this website using the menu or Google search box at the top of this page and also by following internal links within the text.